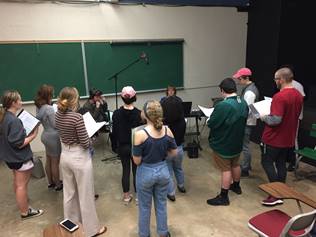 For those of you who think that musical theatre isn’t for you, I ask you to question that notion. The Greatest Showman was one of the most streamed albums on Spotify in 2017 and 2018. If you have found yourself belting out the words to “This is me” in you shower, guess what…. you like musical theater! The Curtain Call Musical Theatre Ensemble will be performing some of your favorites from The Greatest Showman and other new Broadway shows this March in the annual Curtain Call Cabaret.

Senior Parker Jones, who is featured as P.T Barnum in “The Other Side,” says “ I love the movie! It's a fantastic story of inner strength, identity, and redemption. The modernized music created a pathway that could easily be followed by today's audiences, making it a relatable story.” when asked if he was nervous about filling such big shoes on stage, Jones said, Hugh Jackman is a professional performer, where I am not. The only thing I can do is be myself and do the best I can. Fits with the theme of the movie, doesn't it.” He will be singing alongside one of his best friends, Travis Carr. The two make the perfect dynamic duo. 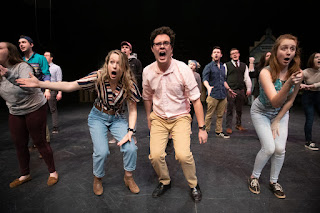 This show will also feature music from the new Broadway Musical Moulin Rouge. This stage adaptation of the beloved movie of the same name is a jukebox musical, meaning it features songs from popular culture. Addy Weaver will be singing the song “Shake it Out” made famous by Florence and the Machine. When asked about performing this song Addy said, “ I feel like an ethereal fairy goddess. Liberated. Like I’m releasing all the negative energy in me. I love this song because it is an acknowledgement of the struggle. It’s like a catharsis, an emotional release of that struggle.” She has been listening to Florence and the Machine for years and is overjoyed to be performing this song.

Moulin Rouge also features several mash-ups. Freshman Bri Yancy will be performing alongside all of the freshman women in the cast in a mashup of Single Ladies, Diamonds are a Girl's Best Friend, and Diamonds are Forever. She says “It’s been exciting to see others just as new to Curtain Call as I am! We’re all learning at the same time, but we each have our own unique strengths we’re bringing to the group.” Come sees these ladies shine bright on the stage. 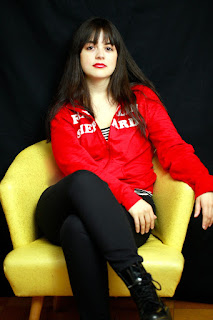 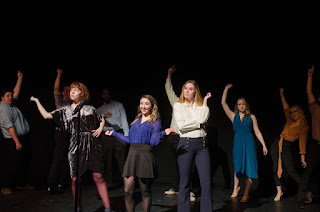 Curtain Call Always Looks on the Bright Side of Life